Ohmigosh. I am SO BEHIND in updating! What can I say – life happened. Ain’t that always the way?

Since I’ve been a bad blogger, I’m going to make up for it with a cover reveal. Finally, I won’t have to squee over this beauty in private anymore! Woohoo!

Ready?
Are you sure?
Okay! 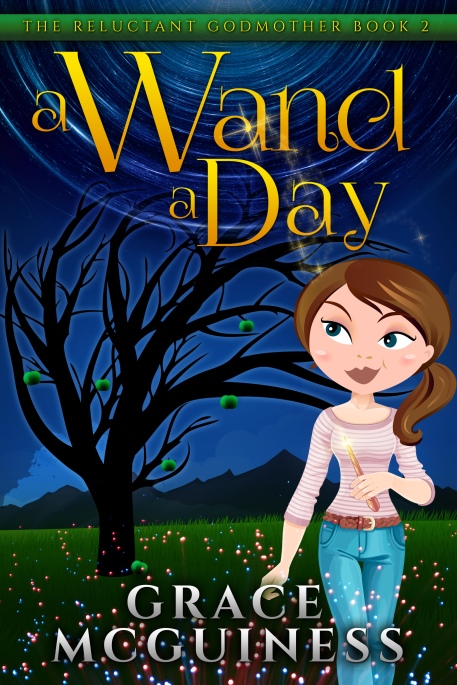 Isn’t it pretty?? The folks at Deranged Doctor Design are awesome!

A Wand a Day is a little darker, a little more outdoorsy (yay, Colorado Rockies!), and involves…well, I’ll let you guess which fairy tale princess-geek Tessa has to help to a happily ever after. ❤

(And if you can’t wait, go play my interactive story featuring a new side character from A Wand a Day: So You Want to Be a Fairy Godmother!)

I am SO EXCITED to have something new worth sharing. I’ve been sick and dealing with a lot of personal stuff this year, so having a scene I like that makes me like this book is a really big deal. SO EXCITED!

—————————-
Nothing about Lucian Rosenau suggested he would find it difficult to deal with a peeping tom.
Lucian pulled a sleek wand from a pocket on the side of his suit pants. The handle was silver, the wand long and dark and polished to gleaming. Several jokes sprang to mind, and I immediately cursed Mueller silently for paving the road to the gutter so well. He pushed inside the room, motioning for me to stay at the door. He didn’t even bother with the doorknob to the bathroom; he simply flicked his wand and the door sprang open with a crash as it hit the wall behind it.
I expected to hear “Expelliarmus!” I was disappointed.
Lucian stepped inside the bathroom and returned a moment later. “Empty.”
Disbelieving, I frowned and squeezed around him to investigate, throwing back the shower curtain and testing the lock on the small window. “I’m not crazy,” I said, as much for my own benefit as his.
“Anything is possible in the land of magic, Miss Hargitay,” Lucian said. “Just because it’s empty now does not mean it was empty two seconds before I walked in. You need…” He waved his wand in a graceful arc, producing a jewel-tone rainbow that expanded to the edges of the whole hotel room. “It’s a simple protection spell.” His tone was deeply disapproving.
“I-I’m sorry,” I stammered. “I don’t know how to use magic…” It wasn’t a lie. I had done a lot with it already – even saved Denver from Ms. Zent’s sleeping curse, in a way – but I didn’t actually know a thing about using it.
“It isn’t your fault.” He smiled at me reassuringly, causing my breath to hitch in my throat. “Mallora should have taught it to you.”
An alarm blared inside me. The last thing I wanted was for Lucian to accuse my boss of failing to do her job. No doubt that would end in me no longer having one of the latter. “Oh, I’ve only been her assistant for about two days. This is really my first job-related activity.”
His dark eyes warmed. “Trial by fire. That is her style.” He ran his hand down my arm reassuringly. Speaking of fire… “You’re all right? No one will be able to get in here without your invitation now.”
I swallowed hard, and not out of fear. “Thank you. A-and I am.” I smiled.
“Good.”
We lingered in the doorway, my heart beating hard in my chest, for several long, breathless seconds. Then, at the same time, I said, “I should find my shoes,” and he said, “Well, I will see you at the presentation.” We laughed softly together.
He moved to the main door. I took a little hop toward him and said, “Thank you.”
“For what? Walking in the door of a lovely young woman’s hotel room? My pleasure.” The heat of his gaze curled up in my lower belly like a purring cat.
I cleared my throat. “For being in the right place at the right time.”
“Still my pleasure.” He smiled that Cary Grant-Rock Hudson-Clark Gable smile at me again, then nodded. “See you at the Lodge.”
I stood staring at the door after he left. Until a small, tinny voice drew my attention to the phone still clutched in my hand. “Mueller?” I said into it. “You’re still there?”
“Do yourself a favor,” he said without preamble. “This time, screw the guy.”
“I have a presentation to get to,” I said, pulling out my suitcase to find the comfortable loafers I had intended to wear.
“Yeah you do,” he smarmed.
“Call you later.”
“Not if he calls you first.”
“Shut up, Mueller.”
We hung up. I applied a couple strategic Band-aids and pulled on the loafers. Still new, still likely to give me blisters, but they didn’t make me want to chop off my feet. That was a significant improvement.
I was sorting through my messenger bag, ensuring I had everything I might need for the presentation and anything that came after it, when I heard a clank in the bathroom.
I looked up to find a man staring at me through the open bathroom door.