Release Day: One For All! 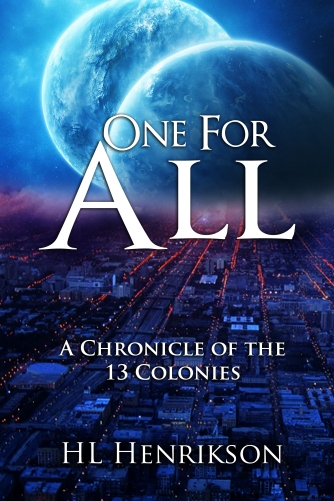 The first novella in my Chronicles of the 13 Colonies series is out now!

When Talbot joined the top secret Agency to protect the welfare of Colony 3’s citizens, he dreamed of crushing the criminal element running her streets to pave the way for class equality. Now, several decades and countless apprentices later, social degradation continues as if his hard work meant nothing. Life may be beautiful in the skyrises, but between the neon and the gutter, drugs, gangs, and violence rule all.

He’s about ready to call it a wash and retire to one of the colony’s sprawling vignards when a routine trip to his favorite watering hole puts him on the scene – and in the way – of a high profile murder. With the limelight shining holes in his cultivated anonymity and his intuition counting down the days to something big and dark and dangerous, the last thing he expects to find is a new protégé. The last thing he needs is the danger she brings with her.

One final mission to the learn the truth. One last hope to save the cause. One way or another, Talbot will find out what’s going on in his city…even though it’s likely to get him killed. Because a life without a cause isn’t worth living, and besides…secret agents aren’t allowed to retire.

Grab it at:
Amazon
B&N